THE MEDICI – STORY OF A DYNASTY

Power, money, beauty, sex and glory crowned the rise of the most important family in the Renaissance Florence: The Medici. From simple merchants to godfathers of cultural rebirth of the city of Florence, The Medici forged the greatness of Florence with a new life. The protagonists of The Medici Dynasty changed the aesthetics and the style of life of the Florentines, what price to pay for their fame? The Medici grew up in the shadow of Brunelleschi Dome in wealth and celebrity, manipulating the fate of Popes and famous Men. Intrigues of power, sex, international plots, treacheries scanned the existence of men and women at The Medici Court, from Giovanni di Bicci, the founder of the first Medici Bank and architect of the economic fortune of the dynasty, to Cosimo the Elder, the initiator of the glory and political rise of The Medici family. Cosimo the Elder, from traitor of the Florentine Republic to Pater Patriae, the Godfather of Florence, laid the foundations of the new era: The Renaissance. Lawrence the Magnificent and his brother Giuliano de’ Medici enriched beauty the new Athens: Florence, that was the most important stage for Artists in Europe: Botticelli, Michelangelo, Leonardo da Vinci, Donatello, Brunelleschi, Ghiberti, Masaccio, Verrocchio, etc. they lived in close contact with their Patrons, glorifying the Magnificence of The Medici with eternal masterpieces. Conspiracies and violence of their enemies bloodied The Medici Family, involving the highest levels of the Church. A story made of exile and punishment of a “Gens” (people) too ambitious that came to the Papacy by Pope Leo X and Pope Clement VII, sealing important weddings alliance with the Kingdom of France. The women of the family: Catherine e Maria de’ Medici brought the elegance throughout Europe. Even when all seems lost, Cosimo I raised the success again, becoming the first Duke of Tuscany, consolidating the power of The Medici. THE MEDICI – STORY OF A DYNASTY is a Walking Tour in Florence that tells the story of the famous family in historical sites, the visitors will be protagonists of an exciting path, full of surprises and unusual curiosity! 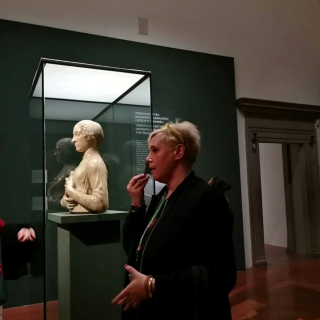